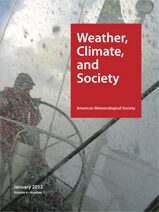 In the spring of 1864, Augustus Smith rose in Parliament to rail against all forms of government spending. He then singled out the decade-old Meteorological Office, thundering that the British government ought not to “undertake the functions of Aeolus” (Walker 2012, p. 51). While observers of contemporary weather services might find his words strange, they will certainly recognize his sentiment. Malcolm Walker’s very welcome history of the British Meteorological Office reminds us that political disputes about weather services are not unique to our own time. Budget cutters have recurrently targeted weather services as symbols of government overreach, while meteorological offices repeatedly proclaim the lives they save and economic benefits they create.

The British Meteorological Office makes a particularly important historical subject, as many of the factors that have shaped other nations’ weather services were carried to the extreme in Britain. Concerns by research scientists about the credibility and accuracy of weather forecasting actually shut down public forecasts between 1866 and 1879. Aviation’s powerful influence led to the Met Office being transplanted after World War I into the Air Ministry, the branch of the British government responsible for the Royal Air Force as well as civil aviation. And neoliberal efforts to apply market discipline to government agencies made the Met Office a reluctant pioneer in pricing weather data in the mid-1990s.

This readable and clearly written book is organized into 13 chronological chapters. After a superficial race through meteorological history from ancient Greece to 1853 in chapter 1, Walker gets down to his main story: a detailed institutional history based on extensive research in government archives. The book is organized around three themes. In chapters 2–7, covering the founding of the office in 1854 until the start of World War I, Walker emphasizes attempts to establish weather forecasting on a soundly scientific basis and to recruit scientifically trained individuals into the weather service. Chapters 8–10 focus on the crucial role that war and aviation played in transforming the Met Office during the first half of the twentieth century. From a small government office that served shipping, agriculture, public health, and newspaper interests at the start of the century, the Met Office effectively became a civilian branch of the military, gaining substantial new funds and personnel. This transformation also cost it Lewis Fry Richardson, the pioneer of numerical weather prediction, whose pacifist Quaker beliefs led him to resign in 1920. The final three chapters present the Met Office, post–World War II, as an internationally prestigious organization developing numerical weather prediction, global meteorology, and climate change research. While none of these themes will be particularly surprising for readers well versed in the history of meteorology, the book should stand as a crucial resource for understanding the development of meteorological services in Britain.

Among the many helpful illustrations are charts depicting the growth of the Met Office work force between 1900 and 1939, and the Met Office’s expenditures from 1900 to 1939 and from 1950 to 2010. It would have been great to have charts tracking these statistics from the Met Office’s founding to the present, as well as a timeline of Met Office directors for easy reference. Also helpful would have been a bibliography, suggestions for further reading, and a list of archives consulted. The author provides excellent summaries of many archival sources, but only rarely provides citations detailed enough to easily track down particular memos or reports.

The narrative focuses tightly on the Met Office, particularly reflecting the concerns of Met Office Directors. Although Walker does not directly engage with current conversations in the history of science, some important recent ideas can help us to better appreciate the story Walker tells. For example, Walker spends several pages narrating bureaucratic disagreements about the design of a new building between 1905 and 1910 (157–163). This section becomes more meaningful in light of David Livingstone’s (2003) exploration of how place shapes the production of scientific knowledge. Several historians have argued that new government scientific bureaus were crucial for the emergence of scientific careers for middle-class professionals in the second half of the nineteenth century, in contrast to the gentleman of leisure who dominated British science previously. Drawing on these arguments could have helped Walker explain the broader importance of the Met Office for British science and society.

Perhaps for reasons of space, Walker chose not to examine the relationship between meteorology and the vast British Empire. Walker’s useful biographies of various officials show that many future Met Office leaders served abroad; I wondered how these colonial experiences influenced the Met Office (for instance, George Clarke Simpson, Met Office director from 1920 to 1938, spent much of his early career in the India Meteorological Department, when he was not exploring Antarctica, advising the British Expeditionary Force in Mesopotamia, serving on the Indian Munitions Board, or consulting about development in Egypt and Sudan). The book might have engaged with Katharine Anderson’s (2005) argument that Victorian-era British meteorologists considered India an ideal natural laboratory in which to demonstrate the political importance of science in a global age. Indeed, Walker does not appear to make use of Anderson’s fascinating and readily accessible book on public meteorology in nineteenth-century Britain, Predicting the Weather: Victorians and the Science of Meteorology.

All in all, Walker has made a valuable addition to a sorely needed genre. We need many more institutional histories if we want to understand how national weather services have shaped the interactions of societies, governments, and the atmosphere over the past 150 yr. It would be fascinating to compare the influence of the British Met Office, founded by gentlemen scientists and later transformed by Thatcherite free-market values, to that of the U.S. weather service, created as a military branch in the wake of the Civil War and later buffeted by a political culture that denies key findings of atmospheric science. Alas, the last comprehensive history of the U.S. weather service was written in 1961 (Whitnah 1961).1 I think some important things have happened since then.