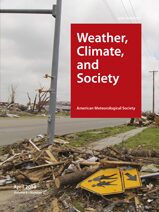 One of the long-term effects of climate change is predicted to be an increase in the intensity and frequency of many high-impact weather events. Thus, reducing greenhouse gas emissions is usually seen to be the response to the problem. Indeed, reducing humanity’s impact on our planet should be pursued as a matter of highest priority. Yet, fixing the planet often receives more emphasis than being resilient to individual weather events. Three points suggest that such emphasis on climate change is misdirected.

First, trying to identify an anthropogenic climate change signal from a time series of the occurrence and intensity of high-impact weather is difficult and in some cases may not be possible with the short periods of available records (e.g., tornadoes and hurricanes). Specifically, apart from some kind of tipping point that radically changes Earth’s climate and weather, the time series of interannual variability of high-impact weather is often much larger than the anticipated changes due to climate change. Where the socioeconomic consequences of increases in intensity of high-impact weather due to climate change can be calculated, they are generally a fraction of the costs incurred by poor weather resilience. For example, one calculation indicates that only 13% more deaths, relative to the 1990 levels, would result by 2085 from even the warmest Intergovernmental Panel on Climate Change (IPCC) scenario (Goklany 2012).

Second, the time scale at which most individuals and businesses plan is more consistent with weather scales (a few weeks to a few years) than climate scales (decades). Of course, large public investments (e.g., dams and flood defenses) must account for how weather might change in the future, but this does not prevent addressing socioeconomic vulnerability to high-impact weather events.

Third, many situations in which the costs of disasters have been increasing have been attributed to socioeconomic factors independent from anthropogenic climate change (e.g., more high-value assets are exposed to weather-related losses). For example, avoiding construction in floodplains, implementing strong building codes, and increasing preparedness can make society more resilient to weather events. Had New Orleans been prepared enough to withstand Hurricane Katrina (repairs estimated to have cost just a few billion dollars), the estimated losses exceeding $100 billion (as well as the over 1400 deaths) would have been substantially less. Further compounding this problem is that finding money for recovery is easier than spending on prevention, even if the costs of recovery are much higher.

In the past, society responded to weather disasters with calls for greater resilience. Today, however, public awareness of anthropogenic climate change has given the climate time scales far greater importance than that of the weather time scales. On the one hand, this bias has a tendency to diminish the political dedication to prevention from current high-impact weather events, regardless of whether they are caused or intensified by the anthropogenic influences. In fact, one consequence of linking high-impact weather events to emissions of greenhouse gases is that storms will continue to occur, even after emissions have been reduced. The resulting disappointment may lead to questions about the validity of strategies designed for protecting society from both climate and weather threats. One attraction of preparing for high-impact weather is that weather will occur regardless of the trajectory of climate change, and thus the value of preparation is not contingent upon any particular emission scenario.

On the other hand, the beneficial effects of carbon mitigation might be diminished by the increasing environmental vulnerability due to poor infrastructures, inadequate land use, air pollution, lack of risk assessment and preparedness, poor sanitation, and urban planning. Rapid industrialization and urban sprawl usually overshadow the positive effects of any urban carbon mitigation policies. Reducing vulnerability to high-impact weather events, disaster management, and adaptive governance more generally ought to be part of long-term, sustainable, development planning in both developed and developing countries (e.g., Brunner and Lynch 2010). Increased capacity to manage high-impact weather can reduce the economic, social, and human damage and, eventually, reduce investments in terms of borrowing money from lending agencies.

Fortunately, such steps taken to protect society from the weather can protect the planet as well. Whether through improving weather forecasts, increasing preparedness, or building better infrastructure, these steps can increase resilience and reduce carbon dioxide emissions. For example, greening neighborhoods or painting roofs lighter colors will both reduce the urban heat island effect and reduce carbon dioxide emissions through reduced air-conditioning costs. For a second example, making cities more resistant to the damage from landfalling tropical cyclones would reduce the carbon dioxide emissions from rebuilding devastated areas. Costs to produce a more weather-resilient society will lead to long-term reductions in carbon emissions. Rather than expecting that reductions in carbon emissions would reduce our future vulnerability to high-impact weather events, investments in building resilience and weather preparedness is a no-regret policy that might also have mitigation benefits. Building well-designed cities makes environmental sense, regardless of climate change.

Linking high-impact weather events with climate change perpetuates the idea that reducing greenhouse gases would be enough to reduce increasingly vulnerable world populations. In our view, this only confuses the public and policy makers as to the socioeconomic susceptibility to high-impact weather. There is no quick fix, single-cause solution for the problem of human vulnerability to socioenvironmental change, nor is there a reasonable prospect of attenuating high-impact weather events. Addressing such issues would give the world an opportunity to develop a two-pronged policy in climate security: reducing longer-term risks in conjunction with preventing shorter-term weather disasters.