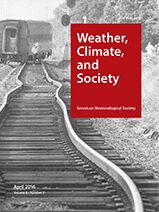 We thank the author of this comment (Hane 2016) for his interest in our work and for his close examination of our study, “Climate change and the impact of extreme temperatures on aviation” (Coffel and Horton 2015). However, we stand by our results in the context of the assumptions and qualifications stated in the original paper, with the core message being that rising temperatures associated with climate change are likely to require increasingly frequent weight restriction of commercial aircraft. The author proposes several technical issues with our study, which we will address in order.

First, Hane correctly notes the difference between maximum takeoff weight (MTOW), a hard upper limit on the allowable weight at takeoff, and takeoff weight (TOW), the weight of an aircraft at takeoff on a particular flight. There are many important weight thresholds for commercial aircraft, and in our study we calculate the temperature-induced weight restriction below MTOW (1000, 10 000, or 15 000 lb). Hane’s primary comment, however, is that considering operational takeoff weights by taking into account required fuel and payload would enable more precise estimates of the burden of weight restriction. As Hane also notes, these are not public data and hence were not used. However, in an ongoing follow up study, aircraft performance models are being used to estimate the required fuel for a given flight, allowing a more precise calculation of required weight restriction at a given temperature.

Hane notes that a flight from LaGuardia (LGA) to Los Angeles (LAX) would not require a full fuel load for a Boeing 737–800 under normal weather conditions. This is true; however, our goal in this initial study was not to consider specific flights, but rather to illustrate the potential for rising temperatures to impact weight restriction.

Second, Hane notes that incremental modifications to the airframe, the engines, or the software can add up to significant increases in performance. This is certainly true, and as we state in our paper, “changes in technology will no doubt revolutionize the aviation industry in the next 50 years.” However, in a warming climate some of these changes may simply help to maintain the same level of takeoff performance as is seen today, rather than to improve it further.

Third, Hane notes that engine thrust can in some cases be modestly increased with few or no hardware changes to the aircraft. We agree, and again note that while engines will likely become more efficient over the coming years, the full benefit of these improvements may be tempered by less favorable climate conditions.

While we appreciate the details noted in this comment, we emphasize that the goal of our original study was to draw attention to more frequent weight restriction as an issue worth considering by airlines and aircraft manufacturers in their planning efforts. While the details suggested by Hane are important areas for future research, it is important that future studies consider each detail in a comprehensive way. For example, making software enhancements to the engine control computers to increase thrust or structural modifications to the airframe to improve short-field performance likely entail significant expense. Small performance changes can have large costs, and understanding the range of threats to aircraft operations is essential.

Our intention was to provide an initial contribution, based on a few simplifying assumptions. Climate change is, as far as we are aware, not often considered within the airline industry, and we think that analyzing its potential impact sooner rather than later is a prudent endeavor.