Water vapor satellite imagery of the remnants of Hurricane Ivan at 1200 UTC 17 Sep 2004, with a 500-mb upper-air data plot. The center of Ivan’s circulation is located about 35 mi (56 km) NW of Asheville, NC. The Raleigh CWA is indicated by the white box over central NC. A dry intrusion extends from southern GA through western NC. The 500-mb dewpoint depressions (the lower-left number in the data plots) indicate a strong moisture gradient from central NC to central TN, with dry air feeding into the circulation from AL and northern FL. At the time of this image, convection is beginning to develop along the eastern edge of the dry intrusion in NC, and a tornado was reported in the northwest portion of the Raleigh CWA about 3 h later.

A skew T plot of temperature, dewpoint temperature, and winds from GSO at 1800 UTC 17 Sep 2004 as the remnants of Ivan were crossing central NC. On the right side of the image is a vertical scale with km plotted on the left and thousands of ft plotted on the right. Note the low-level saturation and dry layer between 3 and 6 km, as well as the rapid veering of winds just above the surface.

The 0.5° storm-relative velocity image from KRAX at 1635 UTC 29 Aug 2004; cell 2 in Table 2. The weak rotation signature is located in the center of the image. The purple area indicates range-folded data. The KRAX radar is located just beyond the upper-right corner of the image, about 35 mi (56 km) to the NE of the rotation signature. At this distance the radar is sampling the cell around 3000 ft (900 m) AGL. Color scale units are kt.

The 1.5° storm-relative velocity image from KRAX at 2118 UTC 27 Sep 2004; cell 15 in Table 2. The VES is the area of inbound (green) velocities in excess of 30 kt (15.4 m s−1) located in northwestern Hoke County. It preceded the tornado touchdown in southern Moore County by 23 min. The blue line indicates the approximate track of the tornado. The KRAX radar is located just beyond the upper-right corner of the image. The VES is about 62 mi (100 km) SW of the radar, which is sampling at around 12 500 ft (3800 m) AGL at this distance. Color scale units are kt.

The 2.4° storm-relative velocity image from KRAX at 1635 UTC 29 Aug 2004; cell 2 in Table 2, the same storm as shown in Figs. 3 and 4. A tornado touchdown occurred about 10 min after the time of this image. The VES appears as the bright inbound velocities near the center of the image. The height of the VES is about 10 000 ft (3 km) AGL. The KRAX radar is located beyond the upper-right corner of the image, about 35 mi (56 km) NE of the VES. Color scale units are kt. 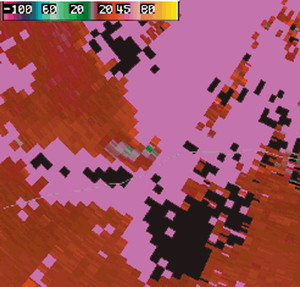 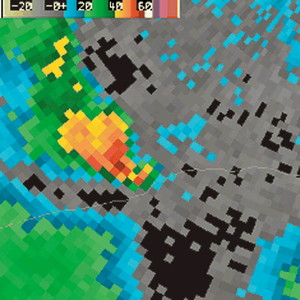 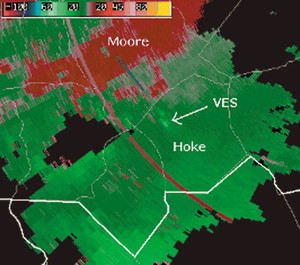 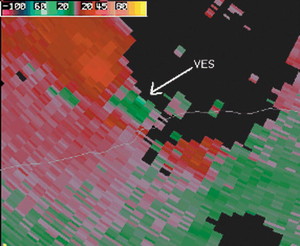