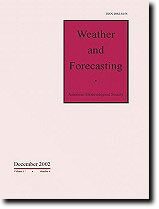 Limited-contour clustering results for all 1008 pentad records for the winters (DJFM) of 1958–99. The acronyms for the named clusters appear in the lower left: offshore trough (OT), Alaskan ridge (AR), coastal ridge (CR), and Rockies ridge (RR). The contours are from 522 to 552 dam, with a contour interval of 6 dam. The thick contour corresponds to the 540-dam contour, which was used to calculate the distance between pentad records in the clustering algorithm. [From Casola and Wallace (2007)]

Map of buoy and coastal stations used in the sea level pressure analysis portion of the study. The station location is indicated with an asterisk and the station ID is given for each location.

Map of surface land stations used in the temperature portion of the study. Forecast errors for this arbitrarily chosen day are plotted as numbers (°C) with larger errors in boldface, and are used to indicate station locations.

The daily 500-hPa geopotential heights derived from the NCEP–NCAR reanalysis data at the (top) initialization time (9 Nov 2007) and (bottom) verification time (12 Nov 2007) for an example of a large forecast error event that occurred during a Rockies ridge regime. The contour interval is 60 m and the 5400-m contour is in boldface.

Forecast errors and infrared satellite image for the example shown in Fig. 8. The GFS 72-h forecasts of sea level pressure are shown as contours in white, and the sea level pressure errors (forecast minus observed) in hPa are plotted at individual stations in black. Wind barbs are also shown at observation locations where the darker gray ones are the observed winds and the lighter gray are the forecast winds.

The daily 500-hPa geopotential height field derived from the NCEP–NCAR reanalysis data valid 29 Nov 2002 for an example of a large forecast error event for 2-m temperature that occurred during a coastal ridge regime. The contour interval is 60 m with the 5400-m contour in boldface.

The 2-m temperature 72-h forecast errors (°C) (forecast minus observed) from the GFS model valid at 1200 UTC 29 Nov 2002 for the example of a large forecast error event that occurred during a coastal ridge shown in Fig. 12. The boldface numbers are errors with absolute values greater than 3°C.

Observed sea level pressure variance (hPa2) composited from the NCEP–NCAR reanalysis data using the winters of 2002–03 thru 2007–08 for individual regimes. The 100-hPa2 contour is highlighted in black and subsequent values are shaded at an interval of 25 hPa2. Longitude lines are shown every 30° and the latitude lines are at 30°, 45°, and 85°N for reference.

Weather Regimes and Forecast Errors in the Pacific Northwest