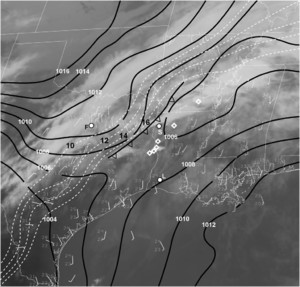 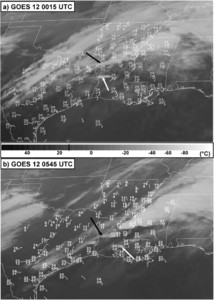 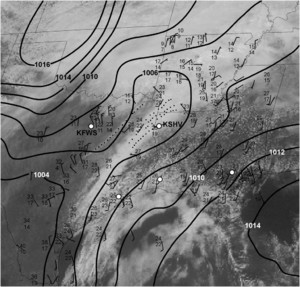 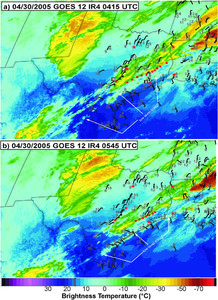 Incorrect surface observation data are displayed in some of the figures in Karan et al. (2010). Figures 1, 3, 12, and 19 in Karan et al. (2010) incorrectly show data from 5 h after the labeled time. The figures are revised and shown here as Figs. 1–4, respectively, with correct surface observations. Corrections to the original text are shown below.

A similar statement should replace the last statement on p. 252. The third sentence of the last paragraph on p. 256 should be replaced with, “The northeast–southwest-oriented line of clouds east of the front appears to move relatively faster than the surface cold front.” Since surface synoptic-scale observations did not indicate any pressure variations associated with this upper-level disturbance, and since the Houston–Galveston, Texas (KHGX), velocity–azimuth display (VAD) analysis indicates such a flow disturbance at 1.5–1.8 km AGL, we prefer to refer to this disturbance ahead of the cold front not as a low-level trough passage, as mentioned in several places in the original manuscript, but rather as an upper-level disturbance. The second sentence on p. 257 should read: “Temporal resolution of surface observations is not adequate for resolving this fast-moving upper-level disturbance.”