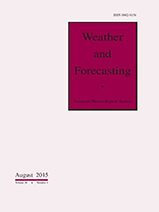 Model simulation domain with the National Hurricane Center best-track positions, at 6-hourly intervals, for each of the five TCs examined within this work. Only the track of each TC during the time period over which it is simulated within the domain is depicted. The filled black squares along each track denote the location at which the National Hurricane Center declared the TC to have completed ET.

Synthetic ADT estimates of maximum 10-m wind speed υmax (kt) from the WSM6- (solid black), Thompson- (dash–dot), Morrison- (long dash), Milbrandt–Yau- (dot), and WDM6- (dash–dot–dot) based simulations for (a) Edouard (1996), (b) Erin (2001), (c) Noel (2007), (d) Ophelia (2011), and (e) Leslie (2012). The left and right vertical gray dashed lines in each panel reflect the model consensus TB and TE, while the vertical gray solid line in each panel reflects the National Hurricane Center–designated TE. Missing data indicate times at which ADT analyzed the TC to be over land.

Hovmöller diagrams of the number of model grid points within ±200 km of the objectively defined cyclone center that contains a given simulated longwave infrared brightness temperature (K; shaded per the topmost color bar), as stratified within 1-K bins between 170 and 310 K, for the (a) WSM6-, (c) Thompson-, (e) Morrison-, (g) Milbrandt–Yau-, and (i) WDM6-based numerical simulations of Leslie (2012). (k) As in (a),(c),(e),(g),(i), but as derived from GOES-East imager channel 4 (10.7 μm) data bilinearly interpolated onto a horizontal grid with Δx = Δy = 4 km. Also displayed are Hovmöller diagrams of the percentage of pixels within 5-km radial bins (%; shaded per the bottommost color bar), out to 200-km radius from the objectively defined cyclone center, with simulated longwave infrared brightness temperature <223 K for the (b) WSM6-, (d) Thompson-, (f) Morrison-, (h) Milbrandt–Yau-, and (j) WDM6-based numerical simulations of Leslie (2012).

As in Fig. 6, but for minimum sea level pressure pmin (hPa). 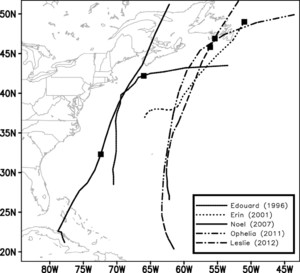 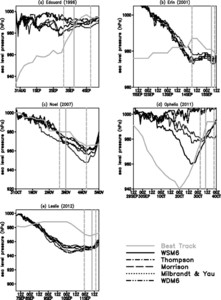 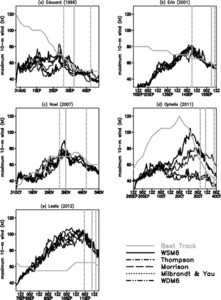 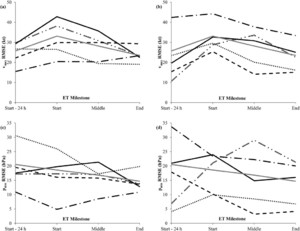 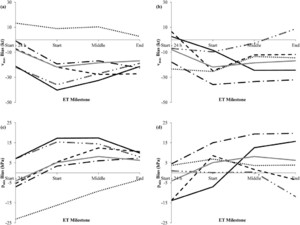 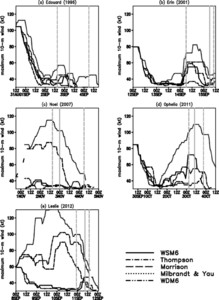 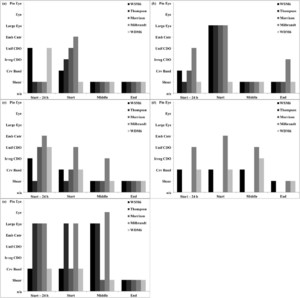 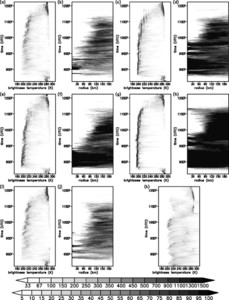 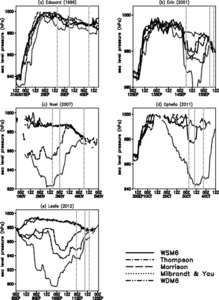 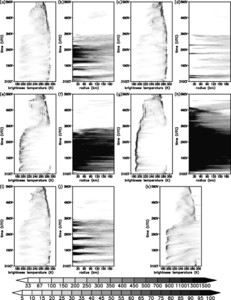 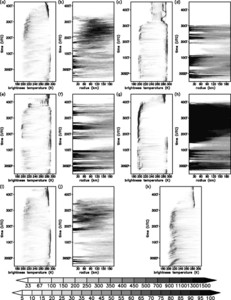 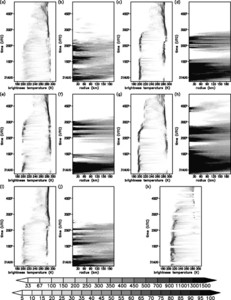 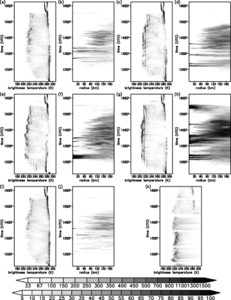 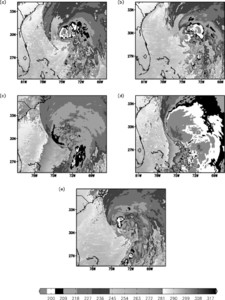 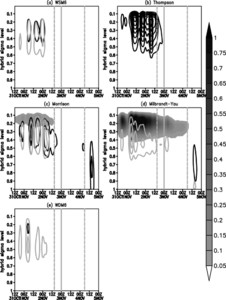 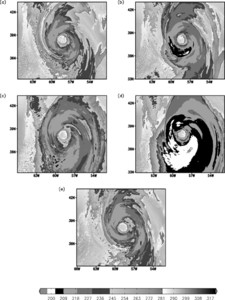