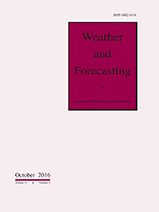 (a) An axisymmetric graph. (b) A diagram of the deviation angle.

Average absolute error curve when using RVM to relate the 15 parameters from a DAGCOM to the tropical cyclone intensity. 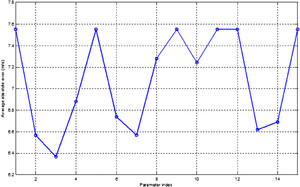 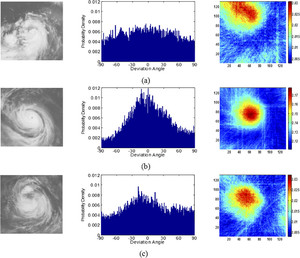 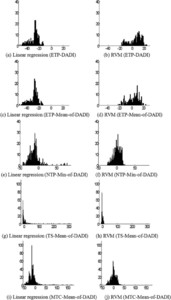 In fact, tropical cyclone intensity estimation can be intrinsically considered as data fitting. There are many methods for data fitting, in which a black-box method is often used. Black-box methods are used to find the relationship between the input variables and output variables gradually through analyzing limited samples and fitting the unknown function. The most common black-box methods involve the use of artificial neural networks, such as a back propagation neural network (BPNN; McCulloch and Pitts 1943) and a radical basis function neural network (RBFNN; Moody and Darken 1989). Because the network node is similar to a human’s brain nerve cells, a neural network can simulate the brain’s incentive function to perform complex data analyses. The basic requirement of data fitting is that it has high accuracy in prediction, which depends on large amounts of sample data. More sample data leads to better predictions. However, the amount of sample data cannot increase indefinitely under normal circumstances. To get better predictive results with limited sample data, a new machine learning method called support vector machine (SVM) was proposed by Vapnik et al. (1997) and widely used for classification, fitting, and pattern recognition. Recently, a new machine learning algorithm, relevance vector machine (RVM), was put forward. Compared with SVM, RVM can reduce the calculation burden of the kernel function and relaxes the conditions required for selecting the kernel function. RVM can also avoid subjective operation in the parameter adjustment process.

The life cycle of a tropical cyclone can be divided into three stages: early, mature, and dissipation. The cloud structure of a cyclone is usually shaped from disorganized to axially symmetric with increasing intensity. For example, the infrared satellite images of different development stages of Typhoon Talim (2005) are shown in Figs. 2a–c. They reveal that Talim’s cloud structure during its mature stage approaches an axisymmetric circle, but in other stages the cloud structure is disorganized. We calculated the tropical cyclone deviation angle matrix with the above method based on infrared satellite imagery, and then used a deviation angle histogram to describe the structure of the tropical cyclone.

Parameters used for the DAGCOM.

(i) Intensity estimation for an NTC

For NTCs including tropical storms (TSs), we referred to the technique used by Piñeros et al. (2008), which considers each pixel point to be the reference point used to calculate the deviation angle between the reference point and each point in the infrared satellite image, respectively. First, for a NTC infrared satellite image whose size is N × N pixels, we get N × N deviation angle matrixes. Then, 15 parameters (Table 2) of each deviation angle matrix were calculated, to get N × N × 15 deviation angle gradient co-occurrence matrix parameter matrixes. Finally, the median, minimum, and mean of the parameter matrices were calculated. Models between the above three values and maximum surface wind speed were built by RVM to estimate NTC intensity.

List of tropical cyclones discussed in this paper, ordered by CMA best-track number. Dates and times of the China FY-2C geostationary satellite observations for TS, ETP, and NTP intensities along with the total number of observations are given. Observations range from 2005 to 2009.

(ii) Intensity estimation for an ETC

We adopted two schemes to estimate the intensity of ETCs. First, because the eye area is obvious, we used the eye area center point as the reference point. The deviation angle between the reference point and each point in the infrared satellite image were calculated in turn. We get N × N deviation-angle matrixes from N × N eyed tropical cyclone satellite images, and then computed 15 parameters (Table 1) of the deviation angle matrix. Finally, a nonlinear model between the 15 parameters and the maximum surface wind speed was built based on RVM to estimate the ETC intensity, which is the same intensity estimation scheme we applied to NTCs.

For mixed types (NTC and ETC) of tropical cyclones, we used the intensity estimation scheme of NTCs to estimate intensity.

b. Implementation of the proposed tropical cyclone intensity estimation technique

The proposed technique is implemented as follows.

There are 15 statistical parameters in the DAGCOM. In the study, we used noneyed typhoon data (2367 infrared satellite images) to choose the optimal intensity-indicating factor from the DAGCOM.

a. The relationship between DADI and tropical cyclone intensity

b. Intensity estimation for tropical cyclones with different intensities

Four experiments were conducted to estimate the intensity of tropical cyclones: 1) ETPs (32.7 m s−1+), 2) NTPs (32.7 m s−1+), 3) TSs (17.2~32.6 m s−1), and 4) MTCs (17.2 m s−1+). Two-thirds of the sample was used to train the RVM and one-third to verify the built intensity estimation model. The average absolute error of the above tropical cyclone intensity estimation results are shown in Table 3. In Table 3, boldfaced values show the minimum of the average absolute errors. The average absolute error, using the mean, median, and minimum of the DADI separately as intensity-indicating factors, is similar. Therefore, in the future, only one of the mean, median, or minimum of the DADI is sufficient to estimate the intensity of a tropical cyclone. Next, we chose the best result for ETP, NTP, TS, and MTC from Table 3. Absolute error histograms are shown in Figs. 6a–j. The X and Y axes of each histogram, respectively, represent the absolute error (error interval is 1 m s−1) and frequency.