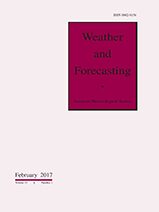 Reliability diagram of GFS-based regression equation probabilities for 0–120-h forecasts over the NATL for the (a) initial and (b) final predictor sets. Results are from the independent data (2011–13 cases). Perfect reliability is given by the gray, diagonal line; above (below) this line indicates underprediction (overprediction).

Reliability diagram comparing the nonhomogeneous set of regression and NHC TWO probabilities for the (a) NATL 48-h, (b) NATL 120-h, (c) EPAC 48-h, and (d) EPAC 120-h forecasts during 2014. Verification is based on the best track. Perfect reliability is given by the gray, diagonal line; above (below) this line indicates underprediction (overprediction). Breaks in the lines indicate forecast probability bins with five or fewer cases.

Reliability diagram comparing the homogeneous set of 2014 NHC TWO (red line) and CON regression (black line) probabilities for the (a) NATL 48-h, (b) NATL 120-h, (c) EPAC 48-h, and (d) EPAC 120-h forecasts. The number of cases in each forecast probability bin is given in the corresponding red and black text. Verification is based on the best track.

Plot showing the locations of model-indicated genesis events, the regression-based 120-h genesis probability (color coded), and whether the forecast verified as a hit (filled circle) or false alarm (open circle) for (a) CMC, (b) GFS, (c) UKM, and (d) CON.

Example graphics from the Tropical Cyclone Genesis Portal website. (a) Overview page of TC genesis forecasts for the NATL. (b) Graphic of GFS-indicated TC genesis events. The ex (×) indicates the forecast genesis location (colored by categorical genesis probability) and the filled circles () give the model-indicated forecast track. The “+54 hr” indicates the time with respect to model initialization at which the genesis criteria were met. This time is provided for situational awareness, but the probability of genesis is valid for the 0–120-h forecast window. The genesis probability is calculated from the multiple logistic regression equation for the GFS 120-h NATL forecasts. (c) Graphic of the consensus-based TC genesis events. The gives the average genesis location (colored by categorical genesis probability). The genesis probability is calculated from the consensus-based logistic regression equation. The letters under the probability indicate the models that are predicting genesis to occur. 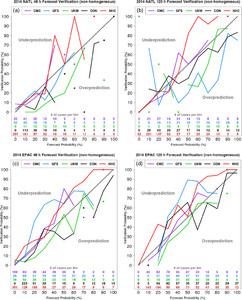 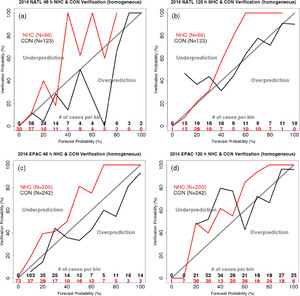 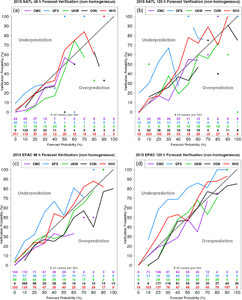 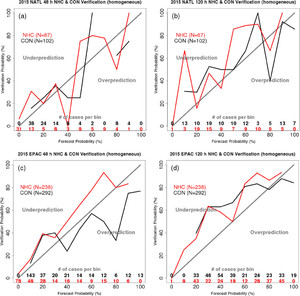 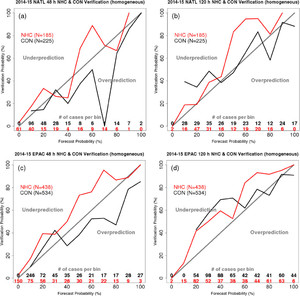 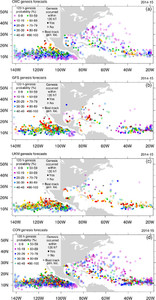 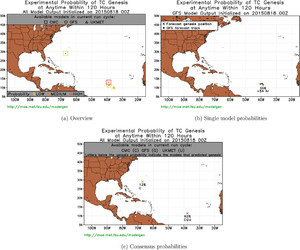