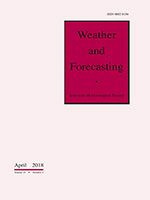 Kernel density estimation (KDE) plot of tornado events (blue contours) and warnings (green contours) in the MLCAPE–SHR6 parameter space for the (a) Great Plains, (b) South, (c) Midwest, (d) Northeast, and (e) West regions, as defined in Fig. 1d in A16, from 2003 through 2015. The total POD and FAR for each region is depicted in the top-right corner of each plot.

As in Fig. 12, but for the MLLCL–SRH1 parameter space. 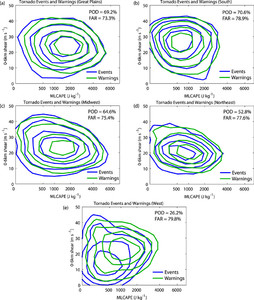 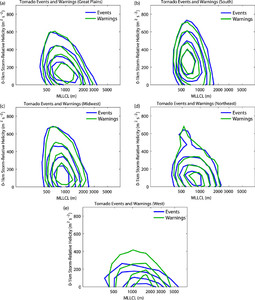 Despite some minor changes between the corrected figures and the original figures, the overall conclusions of the paper are largely unaffected; with the exception of the West, there are no major differences between tornado event and warning distributions.

The assignment of geographical regions of tornado warnings is based on the latitude–longitude of the Weather Forecasting Office (WFO) that issued the warning; all of the warnings with 0–1-km storm-relative helicity (SRH1) > 300 m2 s−2 in the West region are issued by WFOs located in the West region (as defined in Fig. 1d of A16), whose warning regions extend into the Great Plains region. Future work will, for consistency, base the warning region on the latitude–longitude of the location of the highest significant tornado parameter (STP) value within the warning area.