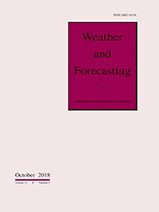 Schematic illustrating the design and advance of (a) the CNTRL ensemble, (b) the no-cycling DA experiments, and (c) the cycling DA experiments. In this schematic DA refers to data assimilation, the process by which information from observations is incorporated into model analyses/forecasts. The acronym BC refers to boundary conditions, in this study provided by the operational RAP model.

Corrected and uncorrected smartphone altimeter error variances during case I (1200 UTC 14 Nov–0000 UTC 17 Nov 2016). Note that the right tail of the distribution extends beyond 6 hPa. The histogram is cut off at this value since approximately 99.5% of SPO error variances are less than 6 hPa2.

(a) Altimeter setting bias and (b) RMSE of altimeter setting, (c) 2-m temperature, (d) 2-m dewpoint, and (e) 10-m wind speed in the no-cycling experiments. (left) Time series of RMSE/bias for the CNTRL (black), PHONE (blue), PHONE_NOQC (pink), MESONET (orange), and METAR (green) experiments. (right) Boxplots display the distribution of RMSE differences between the CNTRL 1-h forecast (prior) RMSE and the analysis (posterior) RMSE for each experiment. Notches in the boxplots represent the confidence interval (95%) for the median.

Sensitivity of no-cycling experiments to the number of observations assimilated. The RMSEs of the altimeter setting, 2-m temperature, 2-m dewpoint, and 10-m wind speed are displayed for the PHONE and PHONE_NOQC experiments. These plots were generated by computing the mean domain-averaged RMSE for all 60 assimilation cycles. Error bars represent bootstrapped 95% confidence intervals for the mean RMSE difference between each experiment and CNTRL. In each sensitivity experiment SPOs of sample size N were selected, prior to each assimilation cycle, by randomly sampling without replacement.

RMSEs of (a) altimeter setting, (b) 2-m temperature, (c) 2-m dewpoint, and (d) 10-m wind speed in the cycling experiments. (left) As in Fig. 6, time series of RMSEs for the CNTRL (black), PHONE (blue), PHONE_NOQC (pink), MESONET (orange), and METAR (green) experiments. (right) Boxplots display the distribution of RMSE differences between the 1-h forecast (prior) RMSEs and 1-h forecasts from each experiment.

Time-averaged spatial distribution of 1-h forecast RMSEs, relative to CNTRL, for the METAR, MESO, PHONE, and PHONE_NOQC cycling experiments. RMSE differences for each cycling experiment are displayed in rows, with each column showing the RMSE difference for a given surface variable. At each verification site, the 1-h forecast RMSE is computed for the altimeter setting, 2-m temperature, 2-m dewpoint, and 10-m u wind over the duration of case I. This calculation is performed for all DA experiments and the CNTRL experiments.

(a) FSSs for 0–1-h ensemble precipitation forecasts from the CNTRL, PHONE, and PHONE_NOQC cycling experiments. Here, the FSS is determined by the fraction of ensemble members that forecast ≥ 1 mm of precipitation at each grid point or within a radius of influence r of that grid point. (b) FSSs for the PHONE and PHONE_NOQC experiments relative to FSSs from CNTRL. Error bars represent bootstrapped 95% confidence intervals for the difference between the FSSs of each experiment and CNTRL. (c) Time plot of FSS, at a spatial scale of 68 km, for the CNTRL, PHONE, and PHONE_NOQC cycling experiments.

(a) Surface low intensity and (b) track ensemble mean analyses in the HRRR, CNTRL, and cycling experiments PHONE and PHONE_NOQC. The minimum observed MSLP is plotted at the end of the period when the surface low was within the MADIS maritime (buoy) and METAR observing networks.

(a) Surface low intensity and (b) track forecasts for ensemble mean free forecasts initialized at 2300 UTC 15 Oct 2016. HRRR intensity and track analyses are displayed for reference. The minimum observed MSLP is plotted at the end of the period when the surface low was within the MADIS maritime (buoy) and METAR observing networks. Two-tailed t tests were applied to test the difference between the ensemble mean surface low intensity in the PHONE_NOQC and PHONE experiments and CNTRL. In the intensity plot, bold markers indicate analyses/forecasts from these experiments whose p value was <0.05. The forecast position of the surface low is plotted in (b). 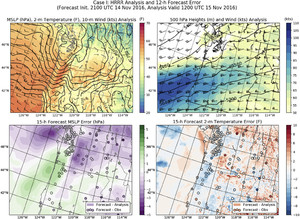 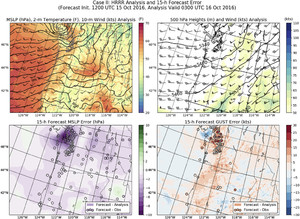 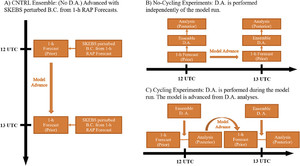 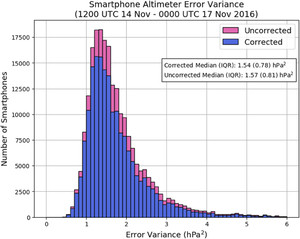 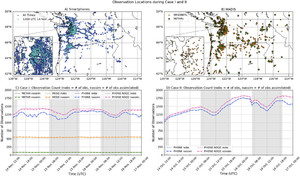 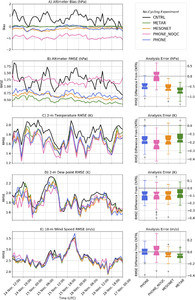 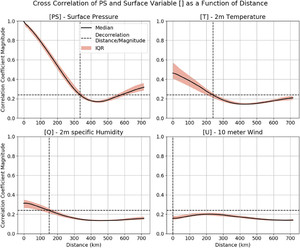 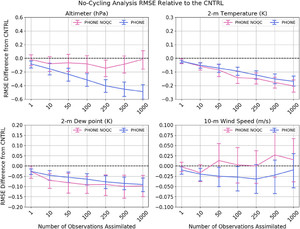 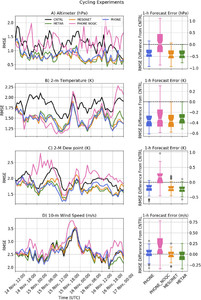 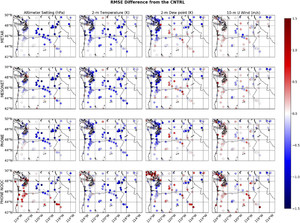 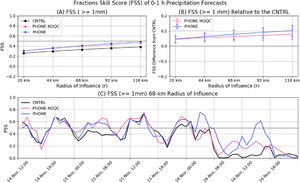 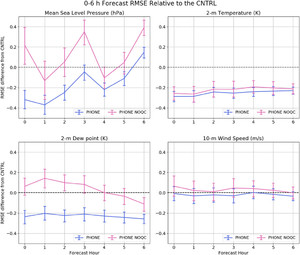 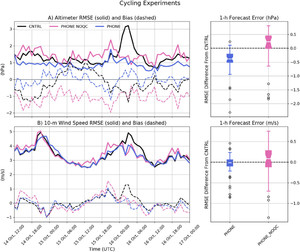 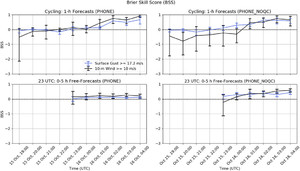