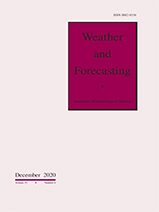 The cartoon El Niño teleconnection map issued by the IRI as updated by this study. Precipitation impacts detected in this study and supported with regional literature are displayed in a concise and easy to read format.

The cartoon La Niña teleconnection map issued by the IRI as updated by this study.

The empirical probability (from 1951 to 2016) of observing above-normal (cool colors) and below-normal (warm colors) seasonal anomalies in DJF during (a) El Niño and (b)La Niña events. Areas considered dry are masked in light red and areas without a significant signal at the α = 0.10 significance level are masked in white. Maps for all 12 seasons and both ENSO states are available at http://iridl.ldeo.columbia.edu/home/.lenssen/.ensoTeleconnections/.

Spatial distribution of the resolution score averaged over all 12 seasons for the (a) IRI forecast and (b) probabilistic known-ENSO EBF. Higher values are indicative of better forecasts as the outcome is more conditioned on the forecast probability.

A comparison of the (a) IRI forecast and (b) probabilistic known-ENSO EBF discrimination as quantified by the GROC score. The EBFs issue maximum probability on the same category in nearly all cases resulting in similar discrimination.

The mean negative reliability over the tropics (30°S–30°N) of the three forecasts. Negative reliability is plotted to remain consistent with the other verification plots where high values on the plot represent good forecast performance.

Reliability diagrams for the (a) IRI forecast, (b) probabilistic known-ENSO EBF, and (c) deterministic known-ENSO EBF with the forecast probability on the x axis and the corresponding frequency of observed outcome on the y axis. Histograms indicate the distribution and quantity of forecast probabilities issued. Dotted lines show a weighted linear fit of the reliability curve with weights determined by the number of forecasts issued in for a probability.

The (a) global and (b) tropics mean RPSS for the IRI forecast and two known-ENSO EBFs. The results are generally consistent between the global and tropical series. Total RPSS scores over the record are given by the values in the bottom-right corner.

The (a) global and (b) tropics mean RPSS for the three forecasts with reference forecasts of climatology and the probabilistic known-ENSO EBF. The EBF is equal to climatology in periods of neutral ENSO. Total RPSS scores over the record are given by the values in the bottom-right corner.

IRI forecast and probabilistic forecast-ENSO EBF forecast (a) RPSS and (b) resolution as a function of lead time. 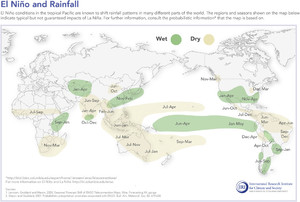 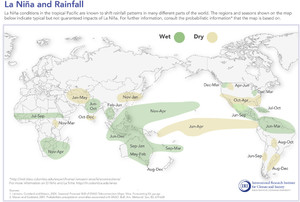 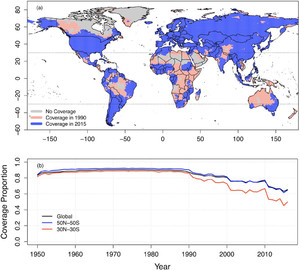 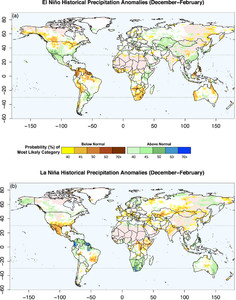 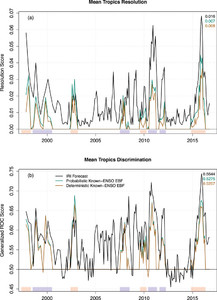 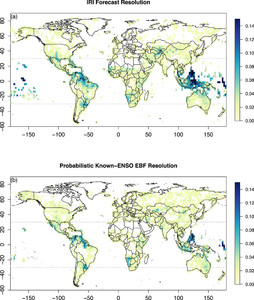 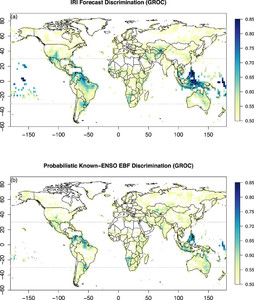 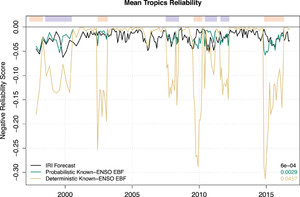 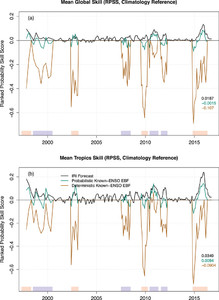 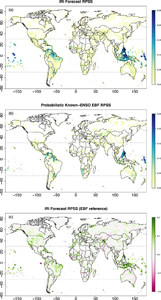 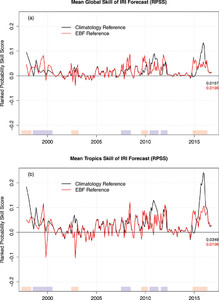 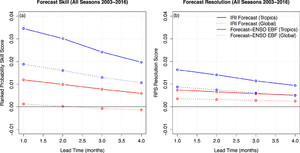